What is port mirroring?

Port Mirroring, also known as SPAN (Switched Port Analyzer), is a method of monitoring network traffic. With port mirroring enabled, the switch sends a copy of all network packets seen on one port (or an entire VLAN) to another port, where the packet can be analyzed.

Port mirroring copies packets entering or exiting a port or entering a VLAN and sends the copies to a local interface for local monitoring or to a VLAN for remote monitoring. Use port mirroring to send traffic to applications that analyze traffic for purposes such as monitoring compliance, enforcing policies, detecting intrusions, monitoring and predicting traffic patterns, correlating events, and so on.

Keep performance in mind when configuring port mirroring. For example, If you mirror traffic from multiple ports, the mirrored traffic may exceed the capacity of the output interface. We recommend that you limit the amount of copied traffic by selecting specific interfaces instead of using the all keyword. You can also limit the amount of mirrored traffic by using a firewall filter. Mirroring only the necessary packets reduces the possibility of a performance impact.

You can use port mirroring to copy any of the following: 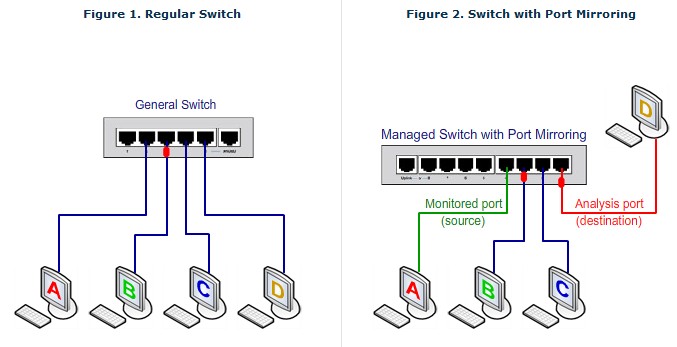